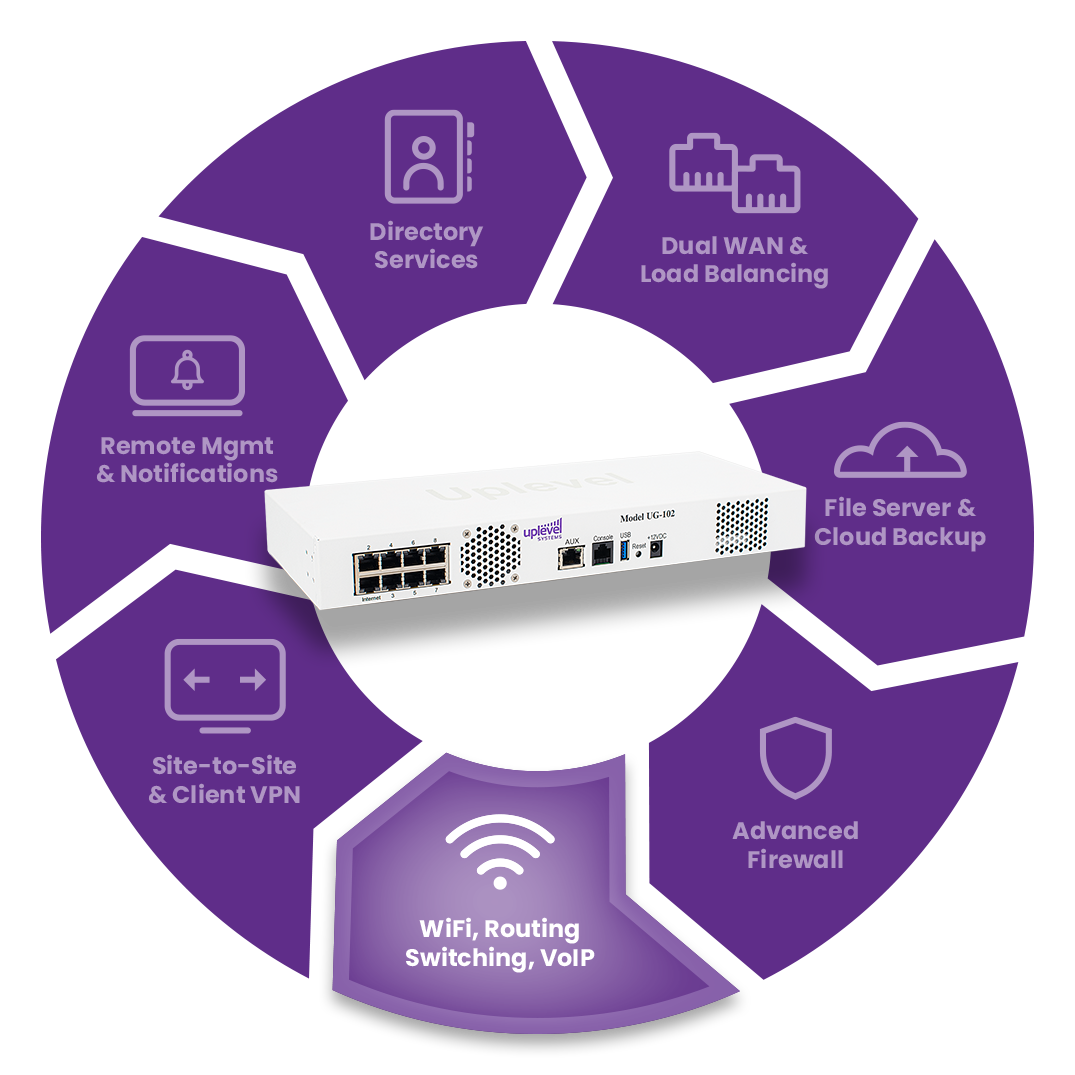 The system has full support for modern on-premises and hosted VoIP phones and applications.

However, poor call quality and reliability is among the most frustrating issues to solve. The Uplevel System helps you address these.

Maintaining proper Quality of Service (QoS) for voice calls is key to business-level voice, and Uplevel greatly simplifies this task. The system can be configured to automatically prioritize voice traffic over data traffic, and ‘reserve’ bandwidth on the Internet connection to avoid call drops or distortion when data overloads occur.

Both on-premises and cloud voice services are supported, with common configurations available as ‘one-click’ options. Custom QoS rules can be created for unusual situations as well.

How does Uplevel simplify VoIP Setup?

What is Hosted VoIP?

“Traditional” VoIP services relied on a dedicated VoIP server - often running on special-purpose hardware - that had to be set up and managed on-premises. The VoIP server not only manages the handsets, but also directs and processes all voice traffic for internal and external calls.

With the universal availability of high-bandwidth, low-latency connections to the Internet, it became possible to move the VoIP server off the customer premises and into a virtual server in the cloud.

What is QoS (Quality of Service), and Why is it important?

Quality of service (QoS) is the name given to the subjective performance of a VoIP system, in terms of audio quality, reliability of calls, uptime of the phone system, etc. Since most phone systems are highly reliable, this term has come to be applied mainly to the voice quality of the phone calls, as perceived by the users.

A high-quality phone call will have high QoS, and be free from problems such as distorted audio, clicks and other noise, dropouts (unwanted silence), disconnects, or one-way audio.

QoS is very important for business phone systems as poor phone calls can seriously affect the functioning of the entire business, particularly those that are reliant on frequent customer interaction. Small businesses often cannot function if the phone system is not working properly.

How do I secure my VoIP phone system?

Virtually all VoIP phone systems use the Internet for communication, and are just as subject to h hacks and attacks as computers and workstations. You can take the following measures to secure your VoIP phone system: Avoid “punching holes” (port forwarding) in the firewall to allow VoIP providers to manage the phone system. Instead, consider placing all the phones on a separate VLAN (automatically done if VoIP QoS is enabled on the Uplevel system) and creating a remote access VPN account that has access to this VLAN.

Enable strong firewall protections such as Threat Analysis and Country Blocking - in particular, block off unwanted countries that are vectors for attacks. Place the phones on a separate VLAN, as mentioned above, with no other devices such as workstations or servers on this VLAN.

If an on-premises VoIP server is present, audit the configuration of the VoIP server to ensure that no security holes are inadvertently created. VoIP servers are designed to maintain high voice quality, and frequently do not pay a lot of attention to network security.

How do I set up a VoIP System for my customer?

Unless you are highly experienced with VoIP services (in which case you don’t need to be reading this!), you will most likely sign up your customer with a commercial VoIP provider, and follow their setup guidelines.

Setting up a VoIP system differs from VoIP provider to VoIP provider, but there are some specific things that are common to all VoIP setups:

1. Check if the Internet connection can handle VoIP. Note that VoIP traffic is two-way and so the uplink Internet path matters just as much as the downlink path. This is frequently overlooked. The customer may believe that he or she has a gold-plated 500 Mb/s Internet service, but this refers to the downlink (i.e., Internet to office); frequently the uplink is only 25 or 40 Mb/s.

While a VoIP call doesn’t require much bandwidth, it does require consistent and unblocked access in both directions. With a 25 Mb/s uplink, one person that decides to upload a video to their Facebook page could easily cause every voice call to stall or drop. Both directions of traffic matter!

2. Ensure that the LAN is set up to allow you to put the phones on a separate Virtual Local Area Network. If the customer has a setup with a “dumb” (i.e., unmanaged) switch - or, just as bad, a VLAN capable switch in the wiring closet feeding a forest of cheap switches at the employee stations! - then VoIP QoS may become quite difficult, or even impossible. To enforce proper QoS, VoIP traffic needs to be segregated from data traffic.

3. Research the handsets that the customer wants to use: in particular, their DHCP requirements and how VLAN tags can be applied to them. Certain handsets require DHCP options to be specified so that they can work. Setting up VLAN tagging is different for every handset. Also, ensure that if workstations are going to be daisy-chained through the handsets, then the handsets support Gigabit Ethernet - far too many of the older handsets only support Fast Ethernet.

4. Allow lots of time to set up and configure the VoIP system. If a third-party VoIP service provider is installing the system, try to be on site at the time the system goes in, to sort out network issues. And remember - Uplevel is here to help! We’ve helped partners figure out all kinds of VoIP problems, from call quality issues to the entire LAN coming down because somebody looped a handset across multiple switches (yes, this happens more often than you think …)

Thank you! Your submission has been received!
Oops! Something went wrong while submitting the form.